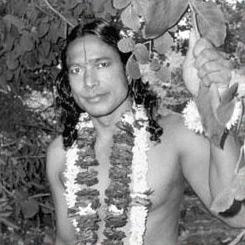 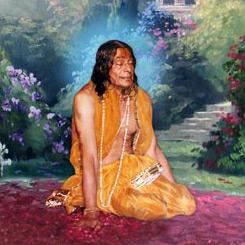 The appearance of Shree Kripaluji Maharaj

Divine breeze permeated the entire brahmand on the Sharat Poornima night of October, 1922, when Jagadguru Shree Kripaluji Maharaj appeared in Mangarh village (near Allahabad, India) in a most respectable brahman family. From the very first day he delighted the hearts of everyone around him with his sweet smile and serene look. Sharat Poornima is the famous full moon night of October when Shree Raseshwari Radha Rani revealed the true Vrindaban Bliss about 5,000 years ago that enticed the heart of God Shiv. Kripaluji Maharaj is lovingly called Maharajji by his devotees. Since childhood his extraordinary virtues were noticed by the people. (As a custom of the family, his elderly people got him married at an early age.) When he was around fourteen years of age he went to Indore to study Sanskrit literature, and, to the amazement of the teachers of that institution, whatever topic he chose to study, he mastered all of them within two years. 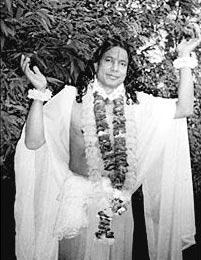 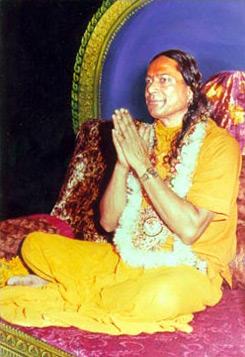 He was now around sixteen years of age. He resumed his natural Divine nature, and, at that time, whoever had seen him, would have glimpsed the true form of Radha Krishn love, appearing in its fullest charm of highest ecstatic excitement… Remaining in that state of absolute engrossment, he walked to Chitrakoot and Sharbhang and Graced the deserving souls living there. Shree Maharajji then moved towards Sharbhang and Graced a devotee of gopi bhao who was deeply longing for Krishn’s vision. In the same state of Divinely-absorbed-consciousness he moved towards Mahoba and then to Jhansi. People of this world could not see the Divineness of Maharajji’s body, but still they saw the physical expressions of his Bhao. The pious people who saw him were amazed to see his Bhao state and thus they took the privilege to invite him to their houses. In this way, there were a number of families in whose house he stayed, somewhere a few hours and somewhere a day or two, but he was constantly twenty-four hours in Bhao. Day and night made no difference for him. In those days people used to call him Paramhansji because he was always in an absolute state of Radha Krishn love. For about two years he stayed in that state.

Around 1940 he came to Vrindaban. Swooning while he uttered ‘Krishn, Krishn,’ dancing in ecstasy, and loudly laughing in ecstatic excitement, his presence in Vrindaban excited the hearts of the devotees who saw him. News about him spread around and a few devotees with a longing heart came from Mathura to invite him to their house. Shree Maharajji now decided to introduce the true Braj ras to the souls of this world as Radha Rani and Shree Krishn gave about 5,000 years ago and Shree Chaitanya Mahaprabhuji showered the same nectar of Krishn love about 500 years ago. Being always absorbed in the ecstatic states of Radha Bhao, it was hard to communicate with the people. So, for the good of the souls, he subsided his Bhao state to some extent and decided to reveal the leela Bliss of Radha Krishn to the people in general through regular satsang which mainly contained the chanting (sankirtan) of the names, virtues and the leelas of Radha Krishn. He started his satsang in the houses of the devotees in Mathura, and then in Agra and Allahabad, and so on. 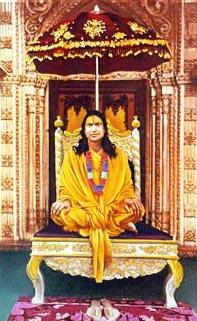 And thus, Shree Maharajji went to Kashi in 1957. His speeches went on for seven days. The congregation had almost all the scholars of Varanasi and also many others who came from other provinces of India. They had never seen such a Divine personality who is absolutely well versed in all of the scriptures (Vedas, Upnishads, Sutras, Upvedas, Vedangas, Darshan Shastras, Puranas, Itihas, the philosophies of the Jagadgurus and the writings of the rasik Saints etc.), and, at the same time, he was humble, kind and absorbed in Radha Krishn Bhao, which radiated from his personality. Now, the learned pandits of Kashi Vidvat Parishad took the privilege of honoring Shree Maharajji with the flowers of their appreciation  and praised their fortune to have the opportunity to worship him as the Supreme Jagadguru of this age. He is thus the fifth original Jagadguru in the last 5,000 years. Prior to him there were only four original Jagadgurus: Jagadguru Nimbarkacharya (before 600 BC), Jagadguru Shankaracharya (509-477 BC), Jagadguru Ramanujacharya (1017-1137 AD) and Jagadguru Madhvacharya (13th century). 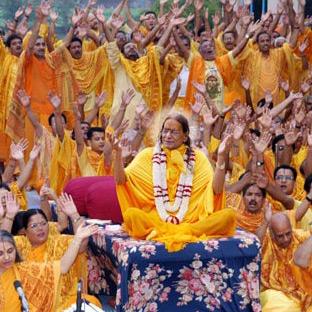 His unlimited Grace on the souls

Shree Maharajji mostly resides in his ashrams at Mangarh, Barsana and Vrindaban. Thousands of people visit these Divine centers to have Shree Maharajji’s darshan and to participate in ecstatic chanting programs and celebrations like Holi, Guru Poornima, Janmashtmi, Radha Ashtmi, Sharat Poornima, and Divali etc. In 2005 Shree Maharajji went for the first time to America to Grace the devotees in the West with his association. He re-visited again for a few months in 2007.